Video poker games appeared about at the same time first personal computers became available, and it can, therefore, be considered as a harbinger of the era of digital entertainment. And what’s more, this game initiated future demand for online gambling: in the 80s, video poker machines were gaining in popularity; not least because the gamers had found out that playing poker with the screen was less stressful than playing with real people by the real felt.

As you would expect, when online gambling came to a full-tilt fortissimo, and online casinos swung their virtual doors wide open, the era of online video poker finally began. Anticipating this development and participating in it from the very early stages, RealTime Gaming set to establish its reputation as one of the best suppliers of online video poker games. Indeed, nowadays video poker RTG games are already found to be among the most popular ones in the industry.

There are several reasons for this. Video poker does not require highly developed skills and complicated strategies; however, these games are still demanding enough to build up the player’s confidence. So, any victory isn’t just a stroke of pure luck; rather, your skills really do matter if you want to be successful. Neither is a player supposed to be a high-roller in order to play these games; as there are usually many betting levels and a huge variety of denominations on offer from online casinos. And last but not least: people win. Online poker games are known to offer generous payouts and to have very good odds.

The demand for video poker games can only grow and diversify over time, and the same is true of the offers!. Online casinos are constantly competing for the new players: it is now standard practice for a newcomer to receive nice welcome bonuses after opening an account and placing a deposit. Also, they are trying to offer as many video poker games as possible. RTG casinos offer so many variations that every player is able to find and play his preferred game — in terms of the action, the rules, and the payouts!

Video poker games have many things in common as they share the same basic principles and strategies, but they are not carbon copies of each other, and this not only because of the differences in rules and dynamics of the game. The matter is the fact that many online casinos have the same paytable for all video poker games they have on the menu, but RTG-powered casinos may individually set the betting limits and the winnings, and it brings around many more differences.

In Joker Poker, five cards are dealt to the player, who then has to decide which cards to keep and which ones to discard, in order to make a better hand. The “Deal” button enables further dealing of cards in place of the discarded ones; and the paytable tells the payout if there is any. Players like the Joker card feature! The joker is a wildcard included in the pack to improve the player’s chances of making up winning hands. To level the variance, the program re-shuffles the cards before the next round starts. Royal Flush is the highest paid hand; the lowest is a pair of Kings. 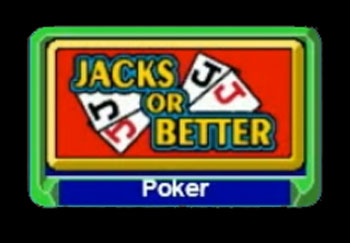 Jacks or Better is considered as a base game for many other variations. It is also referred to as “straight video poker” with only a few deviations from the regular poker game rules. Playing a minimum of 1 credit, you are dealt 5 cards, and then you decide how to build the best hand. You are allowed to keep as many cards as you wish and to discard those you don’t need. The lowest paying combination is a pair of Jacks; the best one is Royal Flush.

This game has been around for already quite some time. Although there have been many small changes and upgrades in the design, Jack or Better is still the same old classy game many players all over the world really like.

Pick’em Poker game is quite similar to Jacks or Better. The only substantial difference is that you are dealt four cards instead of five. The first two cards from left to right cannot be discarded, as they must be included in the final hand. The remaining two cards can be replaced with the new ones, and then you can see whether you have won or not.

Aces & Eights is also based on Jacks or Better. But it is distinguished by a lot better payout table if the player ends up with Four of a Kind in Aces or in Eights. This game is for more experienced players, and it demands some careful strategies. The mechanics of the game work the following way: you place your wager press “Deal” button, and see the first hand of five cards. Then you decide which cards to keep and which to get rid of. The “Draw” button is used to replace the discarded cards. A pair of Jacks compensates your bet. Any hand that is better would bring you a profit — the highest one you can hit is Royal Flush, of course! 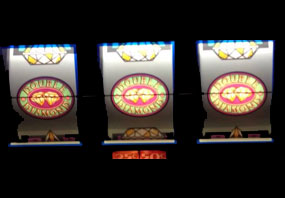 Double Double Jackpot is played with 100 hands dealt in the center, and the payout highlighted in the left part of the screen. The lowest winning hand is a pair of Jacks, while the highest is Royal Flush. Four of a Kind hands are differentiated depending on the fifth card. Players can also adjust the speed of the game, sounds, and screen settings.

All American is a kind of universal game that equally good both for the experienced players and beginners alike. This game has always been very popular: it was not long ago when players were lining up to play this game and all had to wait! The new digital format has brought many new exciting features, and the game is still in the spotlight. Its visual design features are great, referring to American culture in general, as well as poker tradition in particular.

The payout table of this game is one of the most player-friendly ones, with only reduced payouts for Full House and Two Pair. It is a 1-hand game where you need to adjust the bet you really want: the higher you bet, the higher your award will be!

Bonus Deuces Wild is played with a five-card hand, and the player decides which cards to keep and which cards to get rid off — just as in many other video poker RTG games. In this game, the 2s are used as wildcards to maximize your payout, especially when you end up with a Five of a Kind hand.

Those who have played traditional draw poker quite a lot may want to try something different, while still remaining within the cluster of poker games. Seven card is the wild — the best one that can be dealt to you. This can change a lot for you. Rules for betting and for holding/discarding cards are basically the same. While Sevens Wild is relatively less popular than Deuces Wild or Jack or Better, there still are many players worldwide willing to play it!

Everybody knows that 2s are the cards players generally do not like, as they are the lowest value in most games. However, in Loose Deuces, it is quite the opposite! You need to collect as many 2s as you can, because they are the wild cards. And having decided your bet, you can go on to making your decisions to keep or discard cards, as usual. 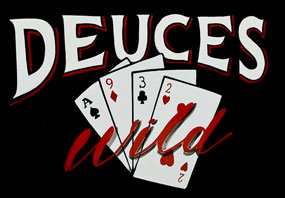 Deuces Wild is a game similar to the previous one, and it is equally interesting both for newcomers and more experienced players. Every Deuce act as a Joker, which logically takes you to a Five of a Kind hand option. But Three of a Kind also pays, according to the paytable! Another nice option is to take the opportunity to double your prize. All these variations make Deuces Wild stand out from the crowd among many other video poker games.

Mystery Bonus is just another video poker game based on Jacks or Better. It is exclusively available for RTG users. The set of rules is basically the same, the only difference being that a hand type is randomly selected at every round. Having already hit the chosen type of hand, the player qualifies for a bonus. Mystery Bonus is exclusively available for the RealTime Gaming users.

Bonus Poker Deluxe follows the traditional Jacks or Better game path. You need to build up a winning hand, with Royal Flush being the best one. If you manage to pick up a card ranked higher than the one which is face up, you get the “double” option to boost your winnings.

The Variety of Video Poker Games

Video poker moving online marked a new stage in the development of online entertainment. Utilizing the great potential offered by online gambling, software developers can create variations that are practically countless — and they really take great pains to do so, offering gamers all kinds of experiences, along with an option to choose the most relevant game. For example, if you decide to play Aces and Eights, you could further narrow your choice to 10, 100, 3 or 52 hands game; and the same relates to many other games available from RealTime Gaming.

There also are many differences in terms of visual graphics. Some games have an extraordinary color palette and flashy images, while the others do not. Every gamer can find the right game to suit themselves; making their decision not only on the basis of the game rules and the payout tables, but also according to their own individual taste, taking care to consider carefully the visual features they’re going to see on the screen while playing.